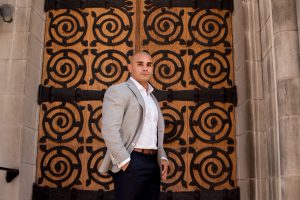 Simon Arias was the recipient of the 2018 H.O.P.E Honoree for Lifetime Achievement from the Foundation.

A Mahoning Valley native, he was born in Youngstown and played football at Ursuline High School where he helped lead the Fighting Irish to a state championship his senior year.  He received a scholarship to play the grid sport at Mercyhurst University where he was voted team captain.

Upon graduation, he used the leadership skills that he developed on the football field and after being hired by the Surace-Smith Agencies of American Income Life in Ohio, quickly moved to a top level management position where he became a regional manager within his first year.

Spending his formative years in a tough neighborhood environment, he realized early on what it meant to have positive role models like mom, Chrissy, who serves as the operations manager for his agency. He has taken it upon himself to seek out and find young people to mentor and impact, especially at-risk youth.

Arias’ financial success has allowed him to give back to the communities he serves as he has established community programs, most notably right here in his hometown.

He recently helped bring the youth program, Inspiring Minds, to Youngstown and has partnered with Maurice Clarett to open The Red Zone, a company whose mission is to help at-risk youth and their families. He continues to be actively involved with the chapter and through his challenge program with area youths, personally takes area children on shopping trips and special events, as well as sporting events as well as various other varies activities.

The Arias Agency regularly supports a variety of charitable efforts, believing that giving back is a key component to success.

Over the years, he has continued to partner with Inspiring Minds and has opened a location in his hometown, where he serves as board chair.