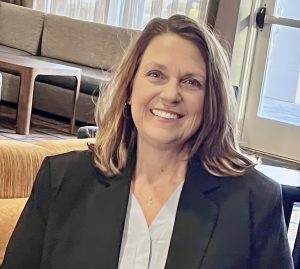 Michele Jones is the president and co-founder of the Down Syndrome Association of the Valley, a regional 501c3 non-profit providing support, advocacy, resources, education, and opportunity for persons with Down Syndrome, their families and our communities across eastern Ohio and Western Pennsylvania. A graduate of Boardman High School, she holds a BS degree in Pharmacy from The Ohio State University and is a Registered Pharmacist in the state of Ohio. Prior to founding DSAV, she was a staff pharmacist at Nationwide Children’s Hospital in Columbus as well as the VA Medical Center in Cincinnati. In 1999, Michele and her husband, Ken, moved back to Northeast Ohio, settling in Howland where they raised their two sons, Ryan and Justin, and daughter, Lauren. In 2004, when their third child, Lauren, was born with Down Syndrome, she did extensive research and contacted Down Syndrome specific support groups throughout the United States. She and her husband traveled the country searching for advocacy, parent support and resources since no local Down Syndrome specific organization was available. In 2007, the Jones’, along with other local parents, founded the Down Syndrome Association of the Valley to provide information and bring resources close to home.

The DSAV Center for Success in Boardman opened its doors in the fall of 2009. This centralized location serves as the DSAV office in addition to a location for the resources, lectures and meeting place for families. DSAV is proudly expanding the Center this year by doubling its size, which allows for more programs, opportunities, and support to those from first diagnosis through adulthood. Michele is a member of the Junior League of the Mahoning Valley (since 2000) and she serves as a parent mentor at Akron Children’s Hospital, providing emotional support and information to parents and caregivers of children with special needs. She has advocated on Capitol Hill several times on behalf of DSAV, speaking to members of Congress and advocating for legislative priorities that impact the lives of people with Down Syndrome and their families. She enjoys traveling to Columbus to collaborate with executive directors from Down Syndrome organizations across the state to bring the most up-to-date programs and services to individuals in our communities. For Michele, there is no greater joy than seeing individuals with Down Syndrome included in the same activities as their peers.