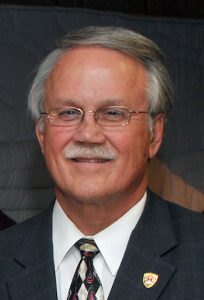 Chief Gocala received the H.O.P.E Award for Lifetime Achievement in 2015 from the Hope Foundation of the Mahoning Valley. It is presented to an individual who is: Honorable. Outstanding. Philanthropic. Excellent in the community.

A long-time proponent of worthwhile causes and organizations that raised funds for those less fortunate, his work with the Hope Foundation and assistance to its many needs is well-chronicled.

That approach has been duplicated by many in what onlookers feel is a thankless profession, but the results achieved over the over the year’s by John J. Gocala have never been questioned and his love for children and the less fortunate. He has always given back to the community in more ways then one, by volunteering and assisting in the start of the Hope Foundation during the start of the Game of Hope Charity Basketball Classic, which was started in 2005 on the campus of Youngstown State University. The event and Chief Gocala continued to help behind the scenes of that event until his retirement in 2012.

During a stellar five-decade law enforcement career, the one thing you come to realize about this year’s H.O.P.E. honoree is that he was ALWAYS proactive when it came to his job.

Known to many simply as the “The Chief,” Gocala is a lifelong area resident who was born and raised on the city’s South Side, attended St. Mathias Grade School and then graduated from Cardinal Mooney High School (1966).

He later earned both his BS and MA degrees in criminal justice from YSU and is a Veteran of the U.S. Army Reserves.

A Distinguished Service Award honoree while at YSU, his additional law enforcement training includes the FBI National Academy; FBI LEEDS; U.S. Secret Service and OPATA; the Ohio Peace Officer Training Academy on two separate occasions (both in 1996 and again in 2000).

He began his law enforcement career in 1971 as a police officer with the City of Youngstown and from 1971-78, served as an investigator with the Vice Unit where he investigated Major Organized Crime Gambling Operations jointly with local FBI.

When YSU went looking for its new Police Chief in 1991, they didn’t have to look any further than the main police station in Downtown Youngstown, tabbing one of their own in Gocala; a highly-respected alums to fill the void.

He remained in that position until his retirement on January 31, 2012 and since 1991, has served as a Reserve Deputy Sheriff with the Mahoning County Sheriff’s Office.

Always one to accommodate other area law enforcement agencies, his mutual aid agreement with the City of Youngstown is still a model, remaining intact and utilized by his successors. Gocala and his wife, the former Joan Krupa, will celebrate their 45th wedding anniversary on September 5th.