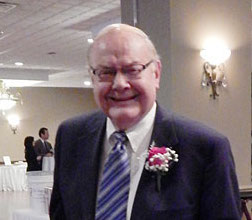 **The Hope Foundation is was sadden to see the passing of Henry Nemenz at the age of 76 in 2015. We ask that you keep Henry Nemenz and his family in your thoughts and prayers.**

The foundation featured Henry Nemenz as honorary chairman of the Wine for Hope event in 2014. In addition, Mr. Nemenz was the first-ever recipient of the H.O.P.E Award for Lifetime Achievement (Honorable, Outstanding, Philanthropic, and Excellent) for his life service and contributions to the Valley. This award is given out to the person(s) who donates his/her time over their lifetime to children and the community as a whole.

Nemenz, born and raised in Salem, was a 1956 graduate of North Lima High School. While attending Mount Union College, he began working at the family grocery store in 1956, until he opened his first store in 1976 in Boardman. Over the years, he has built and remodeled numerous grocery stores in the area and today owns and operates three IGA Super Centers and seven Save-A-Lots in Ohio and Pennsylvania. For his many years in the business, he was named to the Ohio Grocers Association Hall of Fame in 2005.

While he is most recognized for his stores, Nemenz is a true philanthropist in the area. He is the past president of the Poland Rotary; past chairman of the Chili Open Golf Classic, which has raised more than $10-million for local charities; and past chairman of the American Cancer Society. Currently, he’s the co-chairman of the Celebrity Celebration for the Heart Association, on the board of directors for the Millcreek Learning Center and on the board of directors for the Youngstown State Penguin Club.

His community service has not been without reward. He has received the Paul Harris Fellowship Award, named Citizen of the Year in 1989, Outstanding Individual Philanthropist in 1992, given the Mahoning Valley Fabulous 20 award in 1994 and received Channel 33 Entrepreneur Award in 2004.