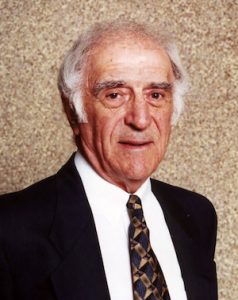 **The Hope Foundation is saddened to learn of the passing of Coach Ed DiGregorio at the age of 93. Coach DiGregorio was the recipient of the 2019 H.O.P.E Honoree for Lifetime Achievement from the Foundation and was a great individual. We ask that you keep Coach D and his family in your thoughts and prayers. Heaven has truly gained an angel.**

A Youngstown native, this individual is a highly-respected teacher, educator, administrator and coach who left his mark at both the scholastic and collegiate levels.

A graduate of East High School, he earned his undergraduate degree from then Mount Union College, later earning his MA from Westminster College. He and his wife, Edie, are the parents of five children; James, Marilyn, Cheryl, Karen and the late Edward.

A noted coach locally on the high school level, his star shone brightest during his 20 years as part of the Youngstown State Athletic Department where he built a solid reputation as a person who supported everything and everyone on campus and in the community.

He was a tireless fundraiser, passionate speaker and promoter of all YSU’s athletics teams and a coach who taught his players not only the game of basketball, but about life as well.

He took over the reins of the women’s basketball program prior to the 1983-84 season and over the next two decades led his team to 319 wins, had five 20-win seasons, won five consecutive Mid-Continent Conference championships, three Mid-Con Tournament titles and led the school to their first three ever NCAA Tournaments. He finished with a 319-241 overall mark with his 319 wins the most ever in program history.

During his time on the bench, he made sure that his recruits earned their education, taking pride in the fact that their education and matriculation was much more important than any game played or won.